My best friend is not a person, it’s a machine and you will soon understand why.

Many years ago I needed an operation. After this I had extreme back pain. One year later after many visits to an NHS Physiotherapist she advised me that she saw many people in her clinic with back pain after having epidurals. Although I had insisted I did not want an epidural the doctors had convinced me otherwise!

After this I saw an Osteopath. On my second visit she said she already knew my first visit had not helped me. When I asked her why, she said she had spoken that week to a doctor who had just gone through the same operation as I. She had put it off as long as she could and now she had needed the help of an Osteopath. The reason was the operation had also pushed her pelvis out of place. The Osteopath was then able to help me when she realised the same thing had happened to me but advised by now my back was seriously weakened. She had me lie on a heat pad and I remember walking out of her door thinking it was still attached. The funny thing was a few years later whenever I got reiki from a friend I always felt as if I had a heat pad across my back.

My back was better for a couple of years then went again when I was gardening. I had to go to a different Osteopath who was great and I stayed with him for many years as my back kept going. I was sometimes in a lot of pain and Tiger balm was then my best friend.

It seems odd to say you can get used to pain but it can happen. Most of the time I was aware I was in pain but it was part of me so I just got on with life. I remember a workplace nurse telling me that she could see how high a threshold I had developed for pain which most people could not cope with. She knew if I mentioned I was in pain that it was at a very high level.

This has had a big impact on my life as I could be doing something so simple and my back would go. One time I was putting a bottle into a bag and had just leaned forward. It got to the point I was too scared to bend or stretch. I  also could not lift my Grandchildren without being in agony afterwards and I could not play on the floor with them. I felt distressed at how much my life was being affected by this back pain. Then one day my life turned around.

A friend introduced me to the Sun ancon Chi Machine. At the time I felt I could not afford one but promised him I would not buy a cheaper copycat version. Two years later after having a bad spell with my back I decided to put it on my credit card. After 8 weeks I could not stop telling people about it and how it had helped me. I so wished I had bought it earlier! It changed my life so much that I was even able to dance the twist with my Grandson at my Daughters wedding. Of course, after that, my back did object but I had actually forgotten I had a bad back.

I was so successful in using mine that I started letting others use it and was amazed at some of the things it helped with. I now use it in my therapy sessions if required by a client. If you would like to find out more information about the Sun ancon Chi machine you can check here on my website. I still use mine when my back is uncomfortable or when I have a headache. If I need more energy I use it too so you can see why it is my best friend. I have not seen my Ostepath in 3 years. The last time he said “Just go home and use your Chi machine as we both know that helps”.

It has made my life so much more comfortable that many days I use it just when I want to relax and chill out. It gives me a gentle massage followed by energy which has to be felt to be believed. Many visitors to my home often ask to use the machine when they visit too. Even my Grandchildren use the Sun Ancon Chi machine. In fact the 8 year old advised me he goes on it when he is in a bad mood and afterwords he feels good again. My Daughter had been so impressed by the Chi machine that she has one at home for all the family to use.  It helps with her M.E and it helps when the children have sore tummies or heads. It also helps her husband relax  his muscles after a day of gardening.What a powerful machine.

So now I say “NO” to Back Pain and know I have the answer at my feet! 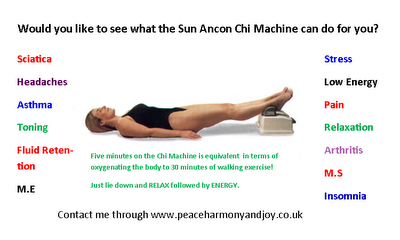