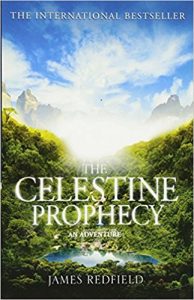 I was speaking to someone today about when we can feel like a Victim. The thing that helped me understand this was when I read The Celestine Prophecy. This tells you of the different types of people that come into play in our lives. I found that I was living the life of The Victim.  Everything was going wrong in my life and it was all “Woe is me”. Once I recognised this I was able to make changes and with the  help of reiki too I managed to change my mindset and have never looked back. My story gets interesting from then on. This is what is said by the author James Redfield.

“If one can connect and build up enough energy, then coincidental events begin to happen consistently.”
― James Redfield, The Celestine Prophecy

The first book came into my hands after a friend had read it. She advised I had to read it and she would bring it in the summer when she was coming to stay with me. Not two weeks had gone past when it arrived in the post with a message that it could not wait and I was to read it now. While I read the book which is also called The 9th Insight I felt strongly that James was into  Energy work and I totally resonated with the book. I then ordered the follow on books.  I also let 2 of my friends read the book.  The day after ordering I got an email to say one of the books was out of stock. I was telling one of my friends this and she said she had bought the one I had missed out on. More interesting was that it was from a  different online bookshop! 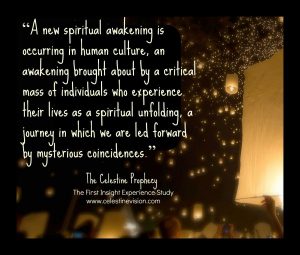 Eventually I read the next book and have to say it did not gel with me. I forced myself to read it to the end but felt that for me it did not work. Because of this I read the first chapter of the next book and decided not to continue reading it. A couple of years later I was at a Spice Scotland event and a person who was a reiki master, medium and Numerologist told me he had a message for me but not till after my birthday which was in a few weeks. He also asked me if I had read the 3rd book and I advised I had not. All he would say is ” It’s true”.

A week after my birthday I suddenly remembered that he had a message for me. I then looked on my Spice booklet to see what events there was to do in the next month and saw he was back doing an event. I called the office and asked if they needed someone to coordinate the event and then agreed to do it.  That night I was  going to my bed when a book fell from the bookcase next to my bed. I took a look at it and just about freaked out when I saw it was the 3rd book! For the next few nights I stepped over it, not wanting to touch it. I then decided to pick it up and looked at it and was amazed at how I was understanding everything in it and then continued to read it from beginning to end. The only thing different this time around was I was now a reiki master / teacher! When I walked into the room where the event was being held a week later the person shouted out ” She’s read the book, She’s read the book!” I asked him how he knew and he held his hands out very wide and said ” Your Aura is way out here!”

“the First Insight is an awareness of the mysterious occurrences that change one’s life, the feeling that some other process is operating.”
― James Redfield, The Celestine Prophecy

The synchronicity was not to end there though as a few years later I was checking my Twitter account and saw a new follower. On checking it was none other than the author of the  Celestine series  James Redfield.  Even more interesting was he was advertising his new book called The 12th Insight, the next in the series. I went straight to the bookshop and brought it home to read straight away.

Since then I have been aware of Synchronicity in my life and how much this speeds up when you are aware of it. Thoughts are energy so watch out for what you are thinking about.