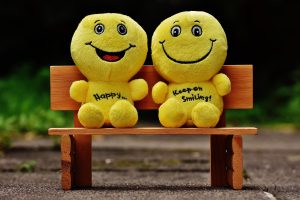 I know that Doctors in Scotland are now about to prescribe going for walks as an antidote to people feeling overwhelmed and depressed. I think they should add in Laughter therapy. This may mean a trip to a comedy club or going to see a laughter therapist.

What does laughter do for you?

I found this site today . It shows how it can help by releasing endorphins, increases blood flow, it can even help you live longer as well as many other helpful things for both the body and the mind.

I had settled down to connect to a zoom call with others when my doorbell rang. This of course set my dogs off, so I quickly went to see who was there. When I opened the door, there was no one, so I sat back down. This happened a few minutes later, with the same results. Eventually after about the fifth time, I looked in the street, hoping to get a sight of whoever was ringing my doorbell but was unsuccessful. I sat back down, deciding to ignore it the next time it rang. To my surprise it rang again, but I realised the sound was coming from my phone. It appears that whenever anyone joined the Zoom call, it made the exact same sound as my doorbell. I certainly felt a laugh bubbling up at this point. What was worse was I couldn’t hear anyone on the Zoom call!

Then last night I was at the bus stop waiting for a bus to get me into town. I was joined by an older lady and a young girl. The girl was checking her mobile and had headphones in. I then heard music playing and wondered if she was aware that we were hearing it. As I was concentrating on the traffic, I was aware in the background, that she kept playing the same tune. I was considering saying something to her when I went into my bag to get money for the bus. Imagine my surprise when I heard music coming from my mobile phone. I had forgotten I had set an alarm. As the music was randomly chosen and not one I normally listened to, I had not realised it was me, playing the same tune over and over! I apologised to the lady next to me, who said “I just thought you liked that song”. Once again I had to laugh at myself and learned, only to use tunes I will remember for my alarms in the future!

Last week I had two of my grandchildren staying over and the teenager had me laughing so much, I had tears in my eyes. His aunt left the conversation holding her stomach lol. It made me realise it was a while since I’d had a good belly laugh, then I get all those experiences in one week. Remember what you put out there……….

So remember how much good it will do to your health and laugh as much as you can and be grateful for all that you have. If you live in Edinburgh, I can highly recommend one of my friends Jo, for laughter therapy. Her website is here.

Special Offers Till The End Of August! When Is a Sale, Not a Sale?
Scroll to top